I’m going to assume that everyone knows what Pinterest is by now, but if you aren’t too familiar with the world of pinning, it is a site similar to Tumblr mostly for people who love food, babies, and weddings. I just so happen to love two of those categories and am in extreme like with the other. I have been interested in trying this recipe for Irish Car Bomb Cupcakes probably every since I got my account. Of course, since this was St. Patrick’s Day weekend it was a perfect time to try these out.

Here are the main ingredients to transform chocolate cupcakes to an Irish booze fest.

I didn’t take any pictures while making the batter #fail. But I can say if you decide to make these too, don’t be alarmed by the bubbles in the batter, it’s just the beer. I was a little worried that the eggs were scrambling but the cake turned out perfectly fine. Okay, on to the chocolate center!

To make the chocolate filling with the Jameson you have to chop up those jumbo chocolate bars that you see in the baking aisle and then cover the chocolate with warm cream. After a minute or two you stir it up and like magic it turns into this: 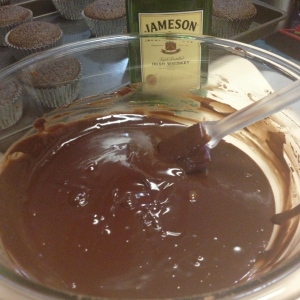 After the chocolate is a pretty melted consistency you add the Jameson. The recipe said 1 teaspoon, but I couldn’t taste the whiskey so I added about 4 teaspoons. Honestly, I would have added more but I was scared the chocolate would be too thin if I kept pouring. 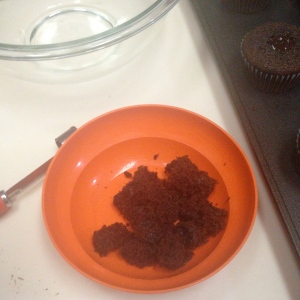 To take the center out of the cupcakes I just used an apple corer and put the centers in a bowl so I could eat them while finishing up.

Once all the centers are out, you can fill them up with the chocolate. I used a piping bag, but you can make your own with a sandwich bag and cut a tiny part of the corner (make sure to cut the bag AFTER you fill it, trust me).

I didn’t take any pictures making the frosting, but what I did differently is I made a basic cream cheese frosting instead of the buttercream frosting from the recipe (a whole pound of butter was just too unreasonable). I added the Bailey’s after the was frosting made, and I went with her suggestion of 6 tablespoons of Bailey’s, it was more than enough. Of course, all that was left was to frost the cupcakes and I decorated them with the green sugar sprinkles.

Here is the recipe I used: Irish Car Bomb Cupcakes. Again, the changes I made were using about 4 teaspoons of Jameson in the chocolate center and opting for a cream cheese base frosting as opposed to the butter cream. If I ever make these again, I might omit the chocolate center all together.

You can follow me on Pinterst @sherellelattany and stay tuned for the next Experiment in Pinning! 🙂